A downloadable game for Windows

Storage medias aren't allowed anymore to be produced until there is a real need for new ones, so the new work area of storage recycling is growing fast and you are part of it. Your are young, definitly need the money and you have quite a lot of experience with everything electronic.

You work for a small starting company that has pretty limited tools but there is a lot of money to make. As your company starts getting more money, the tasks and things you can do become more complex but more rewarding!

At the beginning it's just simple sorting but it quickly becomes cleaning cards, testing them and making them usefull things again!

Use your money to

Decide wich side of the systems suits you the best and make yourself a name!

As promising as the text above sounds, it's at the moment just the idea that i'm working towards! So take everything with a grain of salt as everything in such an early state of development!

As you might see in the screenshots and short video, this at the moment pretty much feels like a demo of what I want this game to become, but what you can see is already a pretty good graphical representation of the final style of the game.

I started working on this game as a entry to 2020 but it already really grew on me and my plans multiply them self on a daily basis, and it is in no way the small simple game I intended it to be.

The idea started when thinking about a small game I did as a school project that I finished in one night. It was about simulating a coffee machine, and even though there wasn't really much to it, it was a really nice project in and of itself.

Based on that I wanted to do something really simple, and that's where cards come in mind. Just a game about cards. That's it!
And that developed into the idea that im having at the moment!

Currently the amount of real game mechanics is close to zero!
But at the moment I really want to focus on the technical side and want it to work as well as it can. And I think that the newest version 0.04a is a pretty good point of starting to develop the first real tasks.

So this is the point where you are/can be important. Finding bugs, stress testing and being creative!

So, don't hesitate to let me know everything you think about it!

Just extract the zip file and start the .exe in the folder. 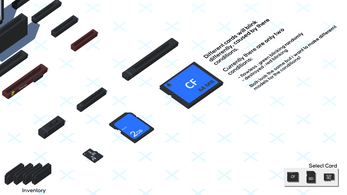 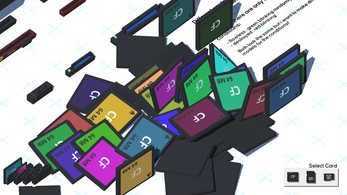